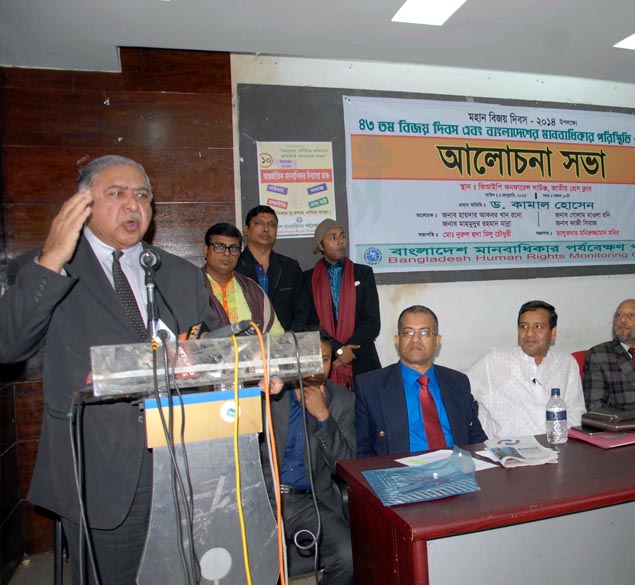 Gono Forum president Dr Kamal Hossain on Friday said the Sate now has lost the sense of humanity as the rulers have got detached from people.
“The state has lost the sense of humanity. Why? Those who are running the country have become totally isolated from people. They don’t give any importance to what people say,” he said.
The noted jurist was addressing a discussion on human rights, organised by Bangladesh Human Rights Monitoring Council (BHRMC) at the Jatiya Press Club.
“The rulers have lost the ability to listen to people’s voices…they should be given mental treatment… they should be given hearing treatment,” Dr Kamal continued.Both the rulers and people count the cost when the former does not give a air to the latter, he said adding people pay for it through sufferings caused by hartal, vandalism and atrocities and the rulers pay for it by getting ousted from power.
Dr Kamal also observed that the rulers have a mentality to remain in power at any cost, even at the expense of bright possibility of development.
Citing media reports about corruption in the judiciary, the jurist voiced his grave concern and said he will issue a letter urging the Chief Justice to take stern actions in this regard.
Reminding the people that they are the only source of the State power, he urged them to get united imbued with the core principles of Bangladesh constitution and to form a humanitarian and pro-people Parliament to establish people’s power.